2016 AD: A year with mixed results for Nepal in foreign relations front 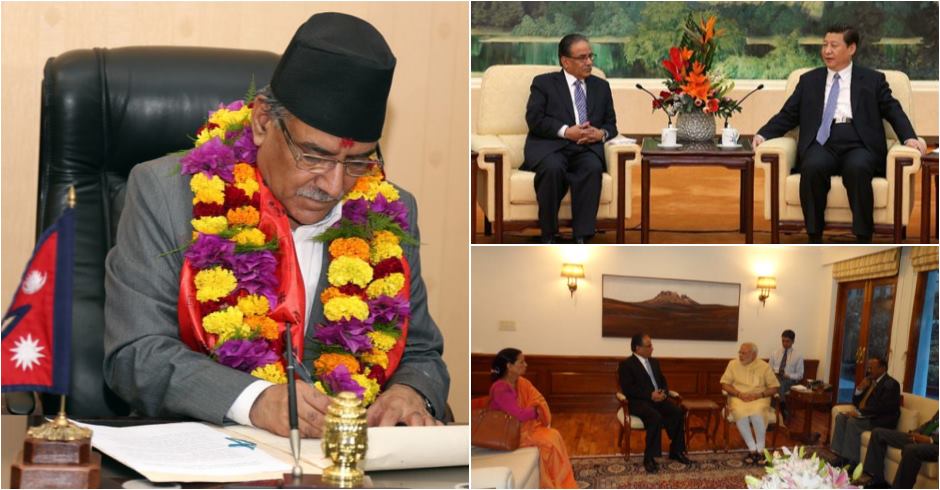 1 Jan, Kathmandu: The world bids adieu to the Year 2016 and enters into the 17th year of the new millennium as the clock strikes 12 tonight. By all accounts 2016 was a year with mixed results for Nepal from the perspective of expansion of international relations and conduction of balanced foreign policy.

Some achievements were made towards preparing the long-term outline for expansion of economic cooperation with two immediate neighbours – India and China- for further consolidating the age-old ties with these countries based on cordiality, goodwill and friendship, and for giving it a new impetus and taking it to new height.

In 2016 initiatives were made towards implementing with further determination the country’s unambiguous foreign policy of additionally deepening and expanding the existing relations based on equality and mutual interest with all nations and not comparing its ties with one another. This could be considered the first step towards a forward-looking conduction of the country’s foreign policy.

The government had forwarded the foreign policy and a plan of action guided by maximum mobilisation of internal and external resources for making rapid economic strides while protecting the sovereignty, independence and territorial integrity and promoting national interests and dignity. However, the desired outcomes could not be achieved in the past year.

Throughout 2016 a great deal of efforts were put into burnishing the country’s image in the international arena and enhancing the greater national interests. These efforts could not get further push due to the change of two governments in a year – an outcome of the political instability in the country.

The state visit of the Indian President after 18 years and the visit at the Prime Minister’s level to India two times in a year as well as the gradual thawing of the Nepal-India relations that had gotten sour could be enumerated as a bit of a progress achieved in 2016. The Indian President’s visit to Nepal taking place after a gap of 18 years is believed to have helped in further deepening the religious, spiritual, economic, educational, cultural and diplomatic ties between Nepal and India, which again contributed to promoting mutual interest.

The visit at the Foreign Minister level from India in connection with attending the SAARC Ministerial Meeting held in Pokhara and the visits from time to time by Nepal’s Minister for Foreign Affairs and other Ministers to India in a bid to improving its bilateral ties with New Delhi yielded some results to that end.

The meeting of the Eminent Persons’ Group formed by both Nepal and India for revising the bilateral treaties and agreements, including the 1950 Treaty of Peace and Friendship was held in Kathmandu, which assisted in addressing each other’s concerns and priorities.

Then there was also the visit by the Prime Minister to India and China in course of the efforts at securing the goodwill and cooperation of the neighbouring countries and building on collaboration with them, which, contributed to the government’s proclaimed policy of steering the bilateral cooperation forward on the basis of mutual respect, equality and interest by strengthening the relations with the neighbours.

Although agreements were forged with China to secure Nepal’s right to access to the sea, Nepal being a landlocked country, by means of the transit and transport agreement with the northern neighbour, no significant progress could be made to that end in 2016. The transit and transport agreement with China is believed to reduce Nepal’s dependence to India in transit and trade. The Minister for Foreign Affairs has been saying time and again that since it is not possible to implement all the agreements and treaties in a day, the Ministry is working to the implementation of the treaties remaining in close contact with India and China on this.

The Memorandum of Understanding related to the trade agreement on the importation of petroleum products from China, the commitment of construction of the required infrastructures for the storage of petroleum products with support from China, carrying out feasibility study of oil and gas exploration in Nepal, China agreeing to provide easy access to more than 500 Nepali goods with export possibility to its market in a bid to reducing Nepal’s trade deficit, the agreement to set up a mechanism for dialogue between the related bodies of the two countries for energy trade and the progress made in terms of securing Chinese and Indian cooperation for the post-earthquake reconstruction and infrastructure development of Nepal are some positive developments in 2016.

Grant aid worth more than Rs 15 billion provided for the expansion of land and air connectivity with SAARC member countries except for China and India, strengthening transport infrastructure, constructing inter-country road and railway network, upgrading the Rasuwagadhi Highway and making service of public hospital effective and efficient can be taken as achievement.

India’s announcement to provide Rs 75 billion as soft loan for post-quake reconstructions is another progressive step.

Likewise, the participation of Prime Minister Pushpa Kamal Dahal in the recently held BRICS Summit in Goa, India, and his meeting with government chiefs and state chiefs of China, India, Brazil, Russia and South Africa have helped understand each other and strengthen their relations.

The world community has been apprised of latest political and economic situation of Nepal through the address by Vice President Nanda Bahadur Pun in 17th Summit of the Non Aligned Movement recently held in Venezuela. Likewise, country’s participation in recently held 71st session of General Assembly of the United Nations and the meeting of Minister for Foreign Affairs Ram Sharan Mahat with his participating counterparts and international partners in Nepal’s development have helped operate Nepal’s foreign relations in a good way.

On the apparent stalled process to hold 19th SAARC Summit scheduled for November 2017, Nepal, despite being under fire from various quarters for a lack of efforts to do the needful to break the ‘stopped’ process and hold the Summit, is as SAARC Chair continuously in talks with the member countries to create conducive environment for the same.

However, the failure to make substantial progress in ensuring safe foreign employment and repatriating many migrant workers who have stranded in various foreign countries due to various reasons or been jailed and the failure to fill the vacant posts of ambassadors to various countries have painted a bleak picture. RSS