Over 26,000 drivers drive without license 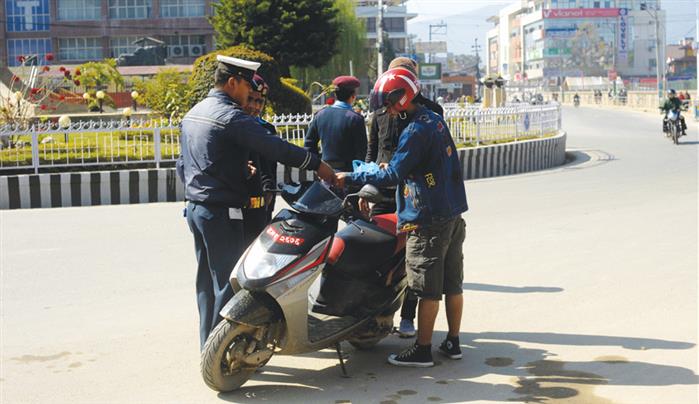 16 Oct, Kathmandu: The number of people driving vehicles without a driving license is on the rise in Kathmandu Valley.

The Metropolitan Traffic Police Division (MTPD) said that as many as 26,529 people were found driving vehicles without driving license in the Kathmandu Valley in fiscal year 2016/17.

The MTPD took action against this many people who were found driving without driving licenses while conducting checks at various places in the Kathmandu valley.

Chief of the MTPD, Deputy Inspector General of Police Sarbendra Khanal, said the number of people driving in unauthorized manner, taking the police for a ride, is high.

“There are many people without license who drive vehicles on the inner lanes. The traffic police have initiated a special campaign against such drivers,” DIGP Khanal said.

He said the number of people driving vehicles without acquiring driving license has increased together with the increase in the number of vehicles in the capital over the years.

The Division has been impounding the vehicle and taking fine of Rs 1,000 from people driving without a driving license. The amount of fine was Rs 250 before this and it was increased to Rs 1,000 on April 13, 2016.

The vehicle is released only after the vehicle owner comes to the Division and produces a valid license.

There are 1.1 million vehicles in Kathmandu Valley alone at present, according to the Department of Transport Management. RSS