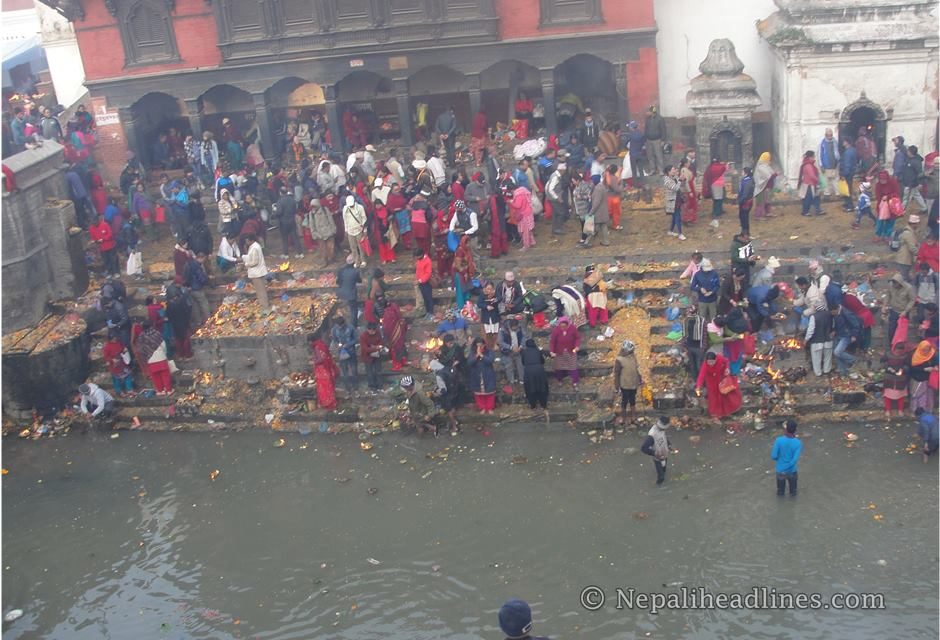 18 Nov, Kathmandu: A total of 35 metric tonnes of solid waste was extracted from various rivers and managed from the ring road area in the valley today, as part of the various weekly clean-up initiatives.

Accordingly, eight metric tonnes of solid waste was scooped out from the Bagmati river banks in front of Pashupatinath Ram mandir area to mark the 236th week of the Bagmati cleaning mega campaign. The Kailash hills area was also cleaned up today.

The area cleaned up today was full of waste resulting from the hundreds of devotees that came to the Pashupati temple premises on Thursday evening and Friday morning to mark the Bala Chaturdashi festival. With Kathmandu metropolitan city waste-carrier vehicles hard to come by, another hundreds of metric ton of waste still remain piled up in the Pashupati temple premises area, according to the cleanliness campaigners.

Today also marked the 196th week of the cleaning of the Bagmati above Guheswari area, where the areas around Hanuman ghat and Gothathar bridge were cleaned up, and two metric tonnes of waste collected. More than 100 people from the Ramro Jorpati, Hamro Jorpati campaign and Pudasaini Friendship Society took part in the cleaning activities.

Likewise, one metric ton of solid waste was scooped out from the Rudramati river bank from Ratopul to Siphal area, according to the Rudramati concern society Vice-chair Rohit Giri. More than 200 people were involved in the cleaning the river today.

Meanwhile, the Manamaiju area in Tarkeswar municipality was cleaned up today, as part of the 164th week of clean Bishnumati campaign. More than 200 people collected five metric tonnes of solid waste from and around the river, according to campaigner Bijendra Lama.

As part of the 34th week of the Manohara river cleaning campaign, two metric tonnes of waste was collected from the Narephant area. 87-year-old Ganesh Lamal joined more than 150 fellow residents of ward no. 32 of KMC to take part in the cleaning act. The campaign is organising a cleaning programme at Koteswar chowk this Tuesday as well, according to campaigner Chandra Dangal.

Also today, the 32nd week of the Ring Road cleanup campaign, 12 metric tons of waste was collected in the cleaning that took place from Machapokhari to Gongobu chowk. More than 350 people took part in cleaning the stretch of the ring road under the convenorship of the Greenhill city hospital management.

Furthermore, the Min Bhawan Aloknagar cleaning campaign reached its 32nd week while the Ring Road Bafal stretch clean up reached its 14th week today. A total of three metric tonnes of waste was managed in the two locations with involvement of security personnel, local NGOs and the general public, according to Coordinator Tara Bahadur Kunwar.

Similarly, the Indramati cleaning campaign reached its 12th week today, with the cleaning act taking place in Kalanki of KMC-14 to manage two metric tonnes of waste.
Cleanliness campaigns are mushroomed across the country since the Bagmati cleanup mega campaign began on Saturday, May 19, 2013. As a result, cleaning initiatives are currently taking place in 42 locations in various parts of the country, according to the Bagmati cleanup mega campaign authorities. RSS