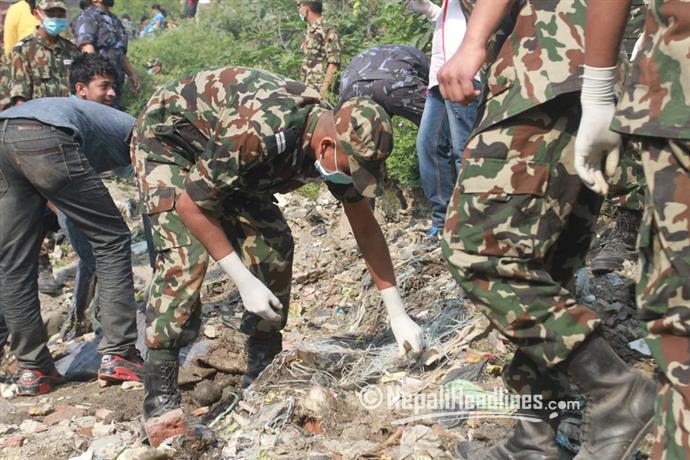 28 Oct, Kathmandu: At least 42 metric tonnes of solid waste have been managed under clean-up campaigns of different rivers in Kathmandu valley. Fourteen tonnes of garbage were picked up from Guheshwari temple area under the Bagmati Clean-up Mega Campaign that entered the 233rd week today.

The participation saw more than 600 people from different walks of life including goodwill ambassador for the clean-up campaign Manisha Koirala, and from the High Powered Committee for Integrated Development of the Bagmati Civilization, Kathmandu Metropolitan City, Nepal Army, the Nepal Police, and Armed Police Force, Nepal.

Similarly, two metric tonnes of solid waste were picked up from Hanuman Ghat and Gothatar bridge area as part of Guheshwari Bagmati Clean-up Campaign that made it to the 193rd week.

Likewise, a total of five metric tonnes of garbage were managed from the area between Ratopul, Sifal, Gaushala, and Manamaiju under the Rudramati and Bishnumati Clean-up Campaigns.

More than 350 people from different walks of life participated. Likewise, one metric ton of solid waste was picked up from Minbhavan area as part of the Minbhavan Aaloknagar Clean-up Campaign that entered the 29th week.