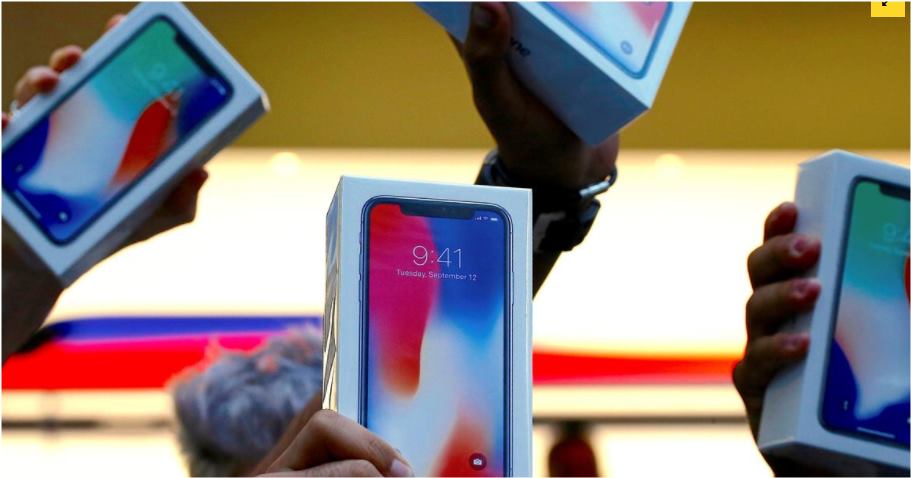 The device features facial recognition, cordless charging and an edge-to-edge screen made of organic light-emitting diodes used in high-end televisions. It marks the 10th anniversary of the first iPhone release and is released in about 50 markets around the world Friday.

The launch came as Apple announced its net profit rose 19 percent from a year ago to $10.7 billion in the fiscal fourth quarter to September 30. Revenues were up 12 percent to $52.6 billion. In Hong Kong, buyers who had pre-ordered the phone online queued to pick up their new purchases, saying they were willing to pay for what they saw as a landmark model.

“It’s the 10th anniversary phone — anyway, other phones like the Samsung are not much less,” said banker Tony Yeung, 35, as he queued outside the Apple store in Hong Kong’s Festival Walk mall. “It’s convenient. You can unlock the phone just by holding it up to your face in bed after you wake up,” Yeung added.

Student Keith Li said all his friends were changing to the new phone and had set aside money for it. Li, 22, had traded in his old phone to help him meet the cost.Inside the Hong Kong store, those still considering whether to buy were trying out facial recognition after concerns it may compromise the security of the phone. Nam So, 36, said he was happy to use it, preferring it to touch ID, which opens the phone at the touch of a finger.

“If your thumb is sweaty then it won’t unlock. Face ID would solve this problem,” he told AFP. Hours after the launch, re-sellers at the Sin Tat Plaza mall in Hong Kong’s commercial Mong Kok district were offering the phone at a marked up price of HK$11,500.

– ‘It’s worth it’ –
Around 300 customers waited overnight outside Singapore’s Apple store, the first shop in Southeast Asia to sell the new model.

Supakorn Rieksiri and Kittiwat Wang, both 22, said they had flown in from Bangkok on Thursday to pick up pre-orders of two phones each. “With all the different features like facial recognition and the bigger screen, it’s all quite worth it,” said Rieksiri, adding that the second handset was a gift for his mother.

Apple is setting an ambitious goal for itself to reinvent the smartphone as it strives to fend off fierce competition from rivals, especially in China.

The iPhone is its main profit driver, accounting for more than half its revenues.At one of Shanghai’s largest Apple outlets, buyers said the facial recognition and screen design were reasons they were happy to pay a hefty price.

“I get a new phone every year when it launches new products. This time, there are many changes but I feel like the price is acceptable,” said Wu Yi, 27, adding she had wanted to pre-order more phones online but they had sold out too quickly.

Apple closed out its fiscal year posting a full-year profit of $48.35 billion, up 5.8 percent, on revenues of $229 billion, a rise of 6.3 percent from the previous year.

In the latest quarter the firm was able to reverse its fortunes in China, boosting overall sales by 12 percent in the “Greater China” region. Sales were up in other regions except for Japan, which saw an 11 percent revenue drop.

Smartphone sales climbed by about a million units to 46.7 million in the three months winding up the California company’s fiscal year, according to the earnings report. Apple chief executive Tim Cook called it a “very strong finish” to 2017.  AFP