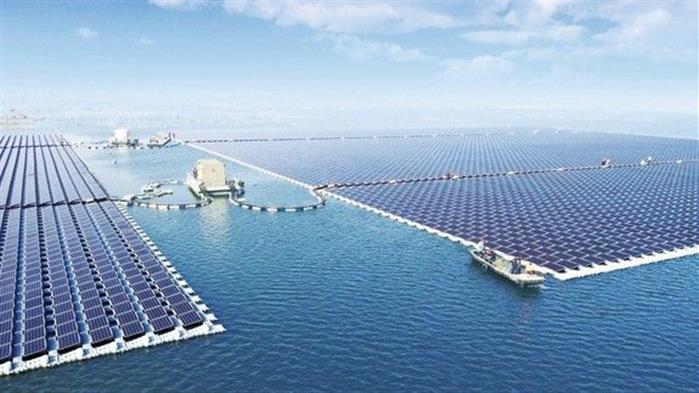 China has installed a massive field of solar panels on a particularly poignant site: a lake formed by the collapse of abandoned coal mines.

The world’s largest floating solar project can produce enough power to light up a nearby city in China’s eastern Anhui province. The local government wants to expand the initiative to more than a dozen sites, which together would generate the same amount of electricity as a full-size nuclear reactor, the New York Times reported this week.
The 40-megawatt project, which was connected to the grid in mid-May, provides a powerful example of China’s broader ambition to lead the world in clean energy development and the fight against climate change — goals that, until recently, were shared by the U.S. government.

With President Donald Trump moving to step back from America’s leading role in global climate efforts, the Chinese government is moving in to fill that void.
In Beijing this week, Chinese President Xi Jinping highlighted his country’s clean energy efforts at a meeting of global energy ministers, just days after Trump announced his decision to withdraw America from the Paris Climate Agreement. U.S. Energy Secretary Rick Perry, who attended the meeting, told reporters he welcomes China taking “the mantle of leadership on the climate.”

That’s not to say China has totally bucked fossil fuels. Far from it. The world’s most populous country is also the planet’s top emitter of greenhouse gases, and it still accounts for about half the total coal consumed worldwide.

But Chinese leaders have said they’re committed to steering their economy toward cleaner energy sources, not just for environmental reasons but also to secure investments and jobs in growing industries like solar and wind power and electric vehicles.

Green jobs are expected to reach 24 million in 2030, up from 9.8 million in 2016, as more countries work to combat climate change, the International Renewable Energy Agency said in its annual report on May 24.

In January, the Chinese government canceled plans to build more than 100 coal-fired power plants, in an effort to limit carbon emissions and curb the dangerous smog choking its cities. China’s energy agency has said it would spend 2.5 trillion yuan, or $361 billion, on clean energy projects by 2020 to help shift the nation away from fossil fuels.

China’s floating solar project, which boasts 166,000 waterproof panels, is similar to smaller facilities in Japan, Singapore, the U.K. and Israel.

Delegations from Japan, Taiwan, Vietnam, Singapore, and beyond have visited the lake regularly to study the project while Sungrow, the project’s developer, prepares to develop the solar technology to sell abroad, the Times reported.

“China is a real driver in the money they invest in the diligence of their innovation,” California Gov. Jerry Brown told Bloomberg Television this week. Brown met with President Xi this week in Beijing, signaling California’s growing leadership role on climate as the Trump administration retreats.

“I want California to partner with China in that endeavor. Otherwise we won’t achieve our climate goals,” Brown said. Agency