Constitution amendment alone is the beginning of its implementation: PM Dahal 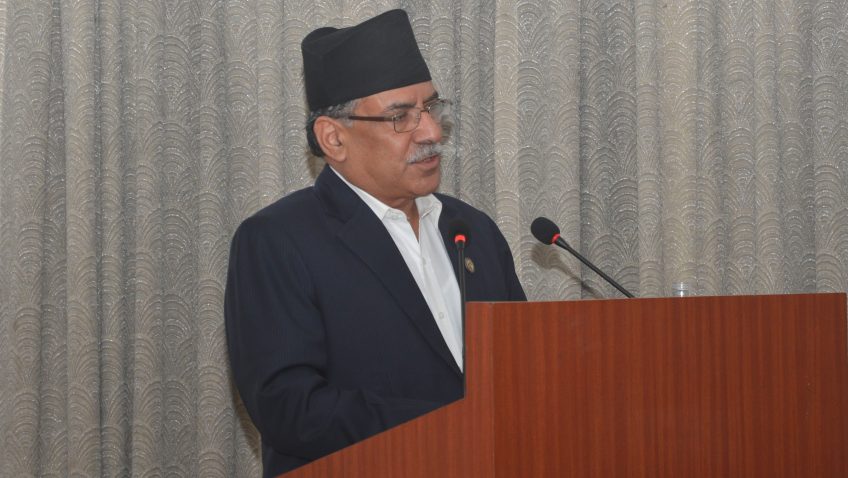 10 Dec, Kathmandu: Prime Minister Pushpa Kamal Dahal has said constitution amendment itself is the beginning of its implementation.

Addressing a programme organised by the National Human Rights Commission (NHRC) at Pulchok today on the occasion of the 68th Human Rights Day, he expressed the belief that amendment to the constitution would help ensure the human rights.

Noting that implementation of the constitution alone would strengthen the human rights and the government has given adequate attention to it, he said the human rights of the marginalized communities could not be protected until the trend of a handful of people exploiting the State was put to an end.

He observed that human rights was not something that the State ‘gives’ and the people ‘take’, stressing the need of promoting and protecting the human rights as the universal truth.

Govt’s preparation regarding the three tiers of elections
The Prime Minister asserted that the government was committed to holding the local, province and federal parliament elections within January 2018 as stipulated in the constitution.

Stating that some bills required for holding the elections have been presented in the Legislature-Parliament while preparations were on to registered some more bills, he expressed the confidence that the elections would further protect and ensure the people’s rights.

PM Dahal reiterated that the government would leave no stone unturned to implement the commitments on human rights that the country has made to the international community.

He said the government has been providing necessary support and cooperation to the Truth and Reconciliation Commission and the Commission of Inquiry on Enforced Disappeared Persons, the two bodies that have been investigating into cases of human rights violations occurred during the conflict. The PM added that the government would extend further support that might be required.

He also expressed the government’s commitment to implement the recommendations of the independent and autonomous commissions.

NHRC chairman Anup Raj Sharma said some voices of dissatisfaction towards the constitution have been heard and the NHRC believed that these would be addressed in consensus through political initiatives.

“Nobody should stick to their guns regarding the constitution and work towards creating the feeling of ownership of all towards the main law of the land, and therein lies the purpose of the protection and respect of human rights,” he said.

Stating that the transitional justice should not be made a matter of contention, the NHRC chairman urged the government to be sensitive towards the complaints of the natural disaster survivors including the earthquake survivors.

The NHRC marked the Human Rights Day under the theme of ‘Human Rights for All at Every House: the Basis for Peace and Development.’ The NHRC has enforced the six-year human rights strategic plan since 2015.

The Day is celebrated in commemoration of The Universal Declaration on Human Rights which was issued on December 10, 1948. The international theme for this year’s Human Rights Day is – “Stand up for someone’s rights today.”
Speaking on the occasion, UN Resident Coordinator for Nepal, Valerie Julliand underlined the need of ensuring justice to the conflict survivors.

NHRC secretary Ved Prasad Bhattarai stated that dignified and safe life alone was what constituted human rights and emphasised on the promotion of a culture of human rights. RSS