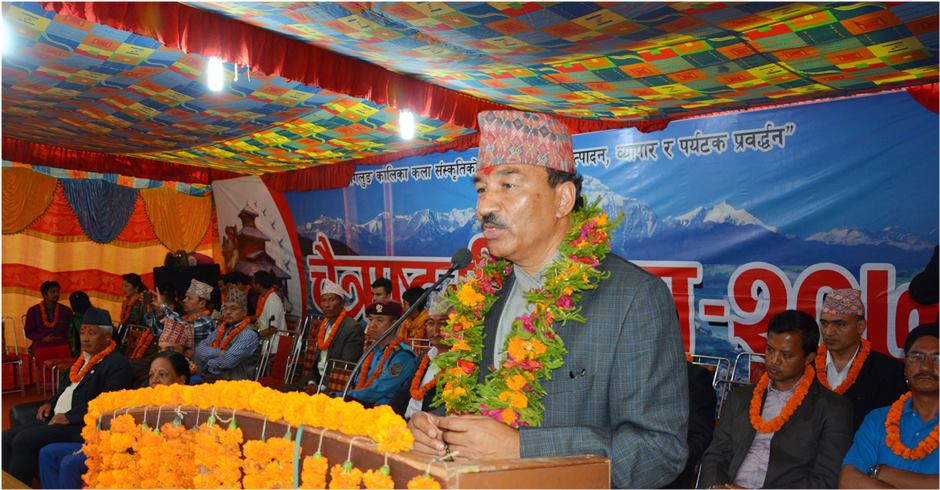 3 April, Baglung: Deputy Prime Minister Kamal Thapa has said it is the common responsibility of us all to conserve country’s culture.

Inaugurating the historic Chaitrastami Fair here today, the Minister for Federal Affairs and Local Development said festivals, cultural diversities and customs are the identities of the country.

“Nepal is a country with many types of diversities in terms of art, culture, customs and so on that’s why it has unique identity in the world and the responsibility of protecting such properties is upon the shoulders of all,” he added.

Nepali culture and festivals have helped maintain goodwill, unity and intimacy among the Nepalis.

Old norms and values and ideologies are never supposed to be disregarded in the name of change, he asserted.

He further expressed his belief that this type of festival would help conserve local art and culture and promote trade.

Stating that the election party viewed upcoming the local-level election very significantly, he said the election it was a ‘do or die’ issue for the party.

Minister Thapa had interactions with chiefs of district-based government offices today itself. On the occasion, highlighting on the need of support and cooperation from all quarters to make the local election successful, he directed office chiefs to ensure service delivery to the locals in such a way that people can feel the presence of the government. He visited the famous temple of the goddess Kalika to pay homage to the Hindu Goddess today. RSS