Mahashivaratri being observed today, Pashupatinath temple opened for public at 3:30 am 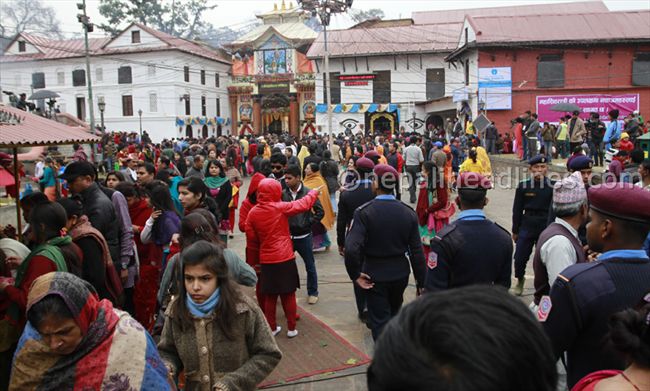 24 Feb, Kathmandu: Hindu devotees all over the country are celebrating the great festival of Mahashivaratri by worshipping Lord Shiva at various rivers, ponds and temples since early this morning.

Devotees visit Lord Shiva’s temples and worship on this day believed to be the day Lord Shiva was born.
Shivaratri is one of the four nights known as Kaalratri, Moharatri, Sukharatri and is regarded as one of the greatest festivals in the holy scriptures of the Hindus—the Puranas.

Skanda Purana, another holy text of the Hindus, also mentions the significance of the Shivaratri.

The religious belief is that if one offers milk, Dhaturo (a kind of intoxicating plant) and ‘Belpatra’ to Lord Shiva and observes a night-long fasting, he/she will receive heavenly blessings.

The festival which is regarded as a national festival consists of ‘warming’ Lord Shiva in the belief that the Lord also feels cold on this day and people organize bonfires at public squares, houses, temples and shrines and perform prayers to please Lord Shiva.

Four kinds of worships including Mahadip, Akhandadip, Lakshya Batti and Dipotsav as well as offering of Belpatra will be performed in four phases tonight, while classical dances are performed at the Kailashkut and Kirateswor Music Ashram.

Pashupatinath Temple, one of the holiest shrines of the Hindus, witnesses a large surge of devotees, including hundreds of sadhus from across the country and from various parts of neighbouring India, on this day that falls on the lunar month of Falgun.

The Pashupati Area Development Trust (PADT) has made all the necessary preparations to facilitate some 1.3 millions devotees expected to visit the Pashupatinath Temple to mark the day, according to PADT member secretary Dr Govinda Tondan.

Of the total 1.3 devotees expected to turn to the temple, half could stay in the queue to pay obeisance to the Lord Shiva in the temple while half may do so from outside.

Member- Secretary Tondan stated that around 4,000 Nepal Police personnel, 2,500 Armed Police Force personnel, 400 officers from Central Investigation Bureau and a large number of traffic police and volunteers from different organizations were mobilized to provide service to the devotees and for security reasons.

He shared, “Environment has been enabled for the devotees to pay obeisance to Lord Shiva without any fear of security and inconvenience.”

According to him, the PADT has observed precaution that the ongoing post-quake reconstruction works are not affected by the flow of devotees on this day.

The Pashupatinath – one of the most revered Hindu God Shiva’s temple – was opened for public at 3:30 am this morning to mark the Mahashivaratri or the ‘Great night of Shiva’.

The devotees lined up for worship and to offer prayers from 2:30 am. The northern, western and southern gates have been opened since 3:30 am, Pashupati Area Development Trust Member Secretary Dr Govinda Tondon told the National News Agency (RSS).

“In the morning hours a devotee may be able to return after completing the worship rituals within just 20 to 25 minutes,” the PADT Member Secretary said. The eastern gate of the temple was opened at 7:30 am.

The authorities have deployed 4,000 Nepal Police personnel, 2,000 Armed Police Force (APF) personnel and 400 officials from the National Investigation Department (NID) for security at the Pashupatinath.

The PADT has scrapped the arrangement for payment-based visit to the temple. Last year, it had collected Rs 3.5 million by arranging tickets for those wanting to visit the temple through the easiest means and without having to face the usual hassle.

The Nanga Baba or naked Sadhus and other great souls, sages and hermits visiting the temple on the day of Mahashivaratri were given accommodation and daily meals since February 22 within different temple complexes at the Pashupatinath vicinity and the Thapathali – based Kaalmochanghat.

With the Mahashivaratri day just beginning, the temples and shrines dedicated to Hindu God Shiva across the country are abuzz with crowds of devotees. RSS