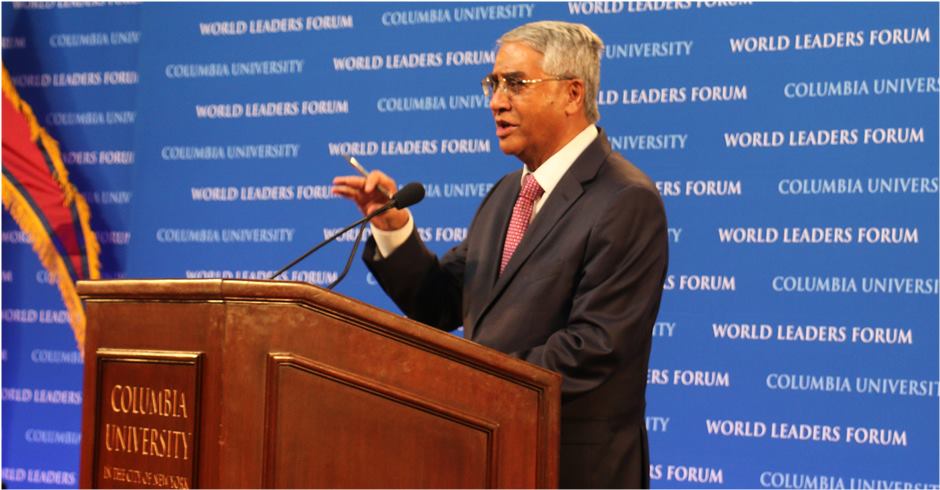 22 Sept, New York, USA: Prime Minister Sher Bahadur Deuba has said that Nepal has adopted the policy of pluralism in the domestic front and of multi-polarism in the international relations.

Prime Minister Deuba, who is here in connection with attending the 72nd Session of the United Nations General Assembly, said this in a statement he made at the World Leaders Forum, organized at Columbia University on September 21.

Addressing to the Forum entitled “Nepal’s transformation to inclusive democracy and development”, PM Deuba stated that Nepal’s reality was pluralism and its national power was an integrated culture and the tolerance of its people.
Mr. Deuba had also addressed the heads of state or of governments at this university 20 years ago.

“The reality of Nepal is pluralism. Nepal’s national strength is her composite culture and remarkable resilience of its people. Nepal pursues political pluralism at home and multi-polarity in international relations,” he said.

Noting that the wisest thought for humanity has emanated from the insightful minds of Nepal, in the form of Panchsheel-five principles of peaceful co-existence, PM Deuba said Panchsheel framework provides a path for harmonious relations out of current uncertainty and turbulence.

Regional cooperation is critical to the building of trust and confidence for peace, progress and prosperity, the PM said adding that Nepal considered connectivity a prerequisite for expanding cooperation and creating a win-win situation.

“Nepal is fiercely proud of its historic independence. In pursuing independent foreign policy, Nepal judges every issue on its merits without fear or favour,” PM Deuba said, stressing that Nepal’s long standing policy has been to maintain friendship with all and work for peace, progress and prosperity.

Nepal remains alert to concerns and sensitivities of its friends and expects them to be sensitive to its concerns as well, the PM reiterated.

Referring to the global situation at present, Prime Minister Deuba said, “The world confronts a more complex and polarized environment. Economic and financial crisis has created a new security and economic situation for geopolitical competition.”

Pointing out that the rise of parochialism and tide of violent religious extremism is turning societies intolerant, and the rise of ethnic politics is eroding core principles that bind us together, PM said, “We must find a common ground and practice tolerance and harmony to protect core values of every culture and confront the real problems.”

Nepal’s tryst with the democracy
The PM said he was present at the forum to highlight the modern history of a nation ‘which has struggled for over half a century for democracy.’

Stating that it is a story of people in an economically least developed country remaining steadfast in their commitment to democratic values, and rule of law under the most difficult circumstances, and widespread poverty, PM Deuba also shared that he story is about the power and promise of dialogue and negotiation in resolving armed conflict.
“It is also about how democratic process creates conditions for enlightened reasoning and seasoning of competing ideas and opinions. The story is about enriching diversity through social cohesion and active citizenship,” he stated.

He opined that the story of democratic struggle by the people of Nepal under the most difficult circumstances demonstrates the depth of their commitment to democracy and, remains exemplary for the contemporary world.

“Having devoted my entire life and energy to the struggle for democracy in Nepal, having been jailed for nine long years for my political belief and ideology, and having been removed from the legitimately elected position of Prime Minister twice by an autocratic king, I consider that Nepal’s democratic struggle waged by hundreds of thousands of my fellow compatriots under the most difficult circumstances remains exemplary for the contemporary world” the PM said.

Recalling that Nepal’s tryst with the democracy had begun in 1950 and the popular movement led by the Nepali Congress Party had demolished the 104 year old oligarchic Rana Regime heralding a new dawn of democracy, PM Deuba said,”Unfortunately, the young sprout of democracy was nipped in bud by an ambitious monarch — who jailed the first democratically elected Prime Minister B.P. Koirala, disbanded democratic Government, crippled representative institutions and outlawed political parties. In 1960, democracy suffered a brutal blow in Nepal.

However, the struggle for democracy never subsided. The people of Nepal never lost their hope. With my party Nepali Congress in the forefront, the democratic struggle continued under difficult circumstances and context.

With three decades of ultimate sacrifice, we restored the parliamentary system of democracy in 1990.”

Restoration of democracy
The Prime Minister went on – “With the restoration of democracy, Nepal embraced economic liberalization and opened its market. The economy grew faster. The dividend of democracy was evident in 8.2% economic growth in year 1993/94 under the elected government.
However, soon after, democratic journey ran into a difficult course by internal conflict that lasted for a decade.

Aggravating this difficulty, the new king instead of engaging with democratic political forces displayed his inclination towards an absolute monarchy and pushed the nation to another phase of dictatorship and uncertainty.

Against this background, underground armed rebels joined the mainstream political parties to launch a people’s movement against the absolute monarchy. The movement compelled the king to yield to people’s power.

A peace accord was signed between the Government and the Maoist rebels in 2006 formally ending the armed conflict and joining the peaceful constitutional politics. They have participated in all elections and also headed governments.

In 2008, Nepali people voted for an inclusive and representative Constituent Assembly to draft a democratic constitution.

Constitution – a landmark document
The second Constituent Assembly promulgated a democratic and inclusive constitution written by people’s representatives in September 2015.

This landmark document not only concludes the peace process and institutionalizesinclusive federal democratic republic in Nepal, but also marks a beginning of new era of peace, stability and development.

The constitution accommodates aspirations of all communities and ethnic groups. It embeds in it the 31 fundamental rights of all people including popular sovereignty.

The constitution provides an independent judiciary.

It provides powerful constitutional commissions to promote and protect rights and interests specific to women, Dalits, and other disadvantaged communities.

I am happy to share with this distinguished audience that one third of women representation is ensured in the federal and provincial parliaments and 40% in the local governments through constitutional provisions.
Earlier this week, Nepal successfully concluded the third and last phase of local level elections with overwhelming participation of all political parties.

Through these elections held for the first time in twenty years, Nepal is creating local leadership.
With democratic institutions representing the legitimate interests of people, we hope to build future leadership from the grassroots.

The essence of Nepal’s democracy is inclusion- inclusion in political, social and development process.

We are preparing for elections to national and provincial parliaments as mandated by the constitution.

Nepal’s population is young. We have abundant natural resources. We look to enhanced support and cooperation from the international community to promote investment and create jobs. Our strategic location between India and China also provides an opportunity to make the best use of their progress and rapid development.

On Nepal-US relations
I would like to briefly touch upon the relations between Nepal and the United States.

The United States was among the first few countries to establish diplomatic relations with Nepal in the 1940s.

Our relations have remained cordial and cooperative marked by mutual interests sand understanding.
The US has supported Nepal for democracy. We thank this nation for its continued goodwill and support for the socio-economic development of Nepal through a variety of measures.

We are encouraged by the inclusion of Nepal in the Millennium Challenge Corporation. The $500 million MCC grant is the largest grant ever received by Nepal covering energy and transport. It will greatly help to harness Nepal’s hydro potentials and generate thousands of megawatts of clean energy. It will contribute to the mitigation of climate change while fostering green growth.

People-to-people contacts area dynamic dimension of Nepal-US relations. The US continues to be the most preferred destination for Nepali students for their higher education. The academic rigor, rich research tradition of many American universities like yours have attracted our brilliant minds.

Similarly, the Americans visiting Nepal, on academic missions, for tourism and as development workers and volunteers have notably contributed to its socio-economic development. Such exchanges act as a strong bridge between our countries, and peoples.

Desire to promote collaboration with Columbia University and universities in Nepal
Before I conclude, let me express my desire to promote greater collaboration and cooperation between the Columbia University and universities in Nepal for undertaking research in the areas of common interests.
The academic exchanges contribute to sharing of ideas and perspectives, and enriching insights and understanding.

I know, there are several leaders-in-making in the audience. I would love to hear from their experiences, and to listen to their perspectives.

With this note, I would like to thank once again Mr. Lee C. Bollinger, President of the Columbia University, faculty members, friends of Nepal, alumni, students and the entire university family for receiving us so warmly, for listening to me with such an interest, and making all arrangements for today.”
The Prime Minister also expressed his belief that the Forum has contributed to cross-fertilization of knowledge and exchange of perspectives on several contemporary issues of vital importance.