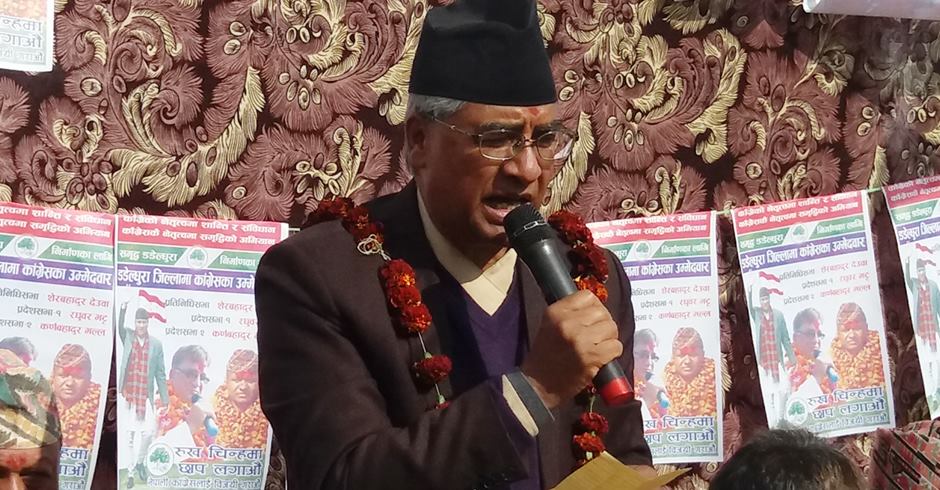 4 Dec, Dadeldhura: Prime Minister Sher Bahadur Deuba has said Nepal’s democratic constitution promulgated under the leadership of Nepali Congress has secured rights of all castes and communities. “I now own the responsibility to make the people of far-western Nepal including Dadeldhura feel development in their localities,” he added.

In his address to an election assembly organised by the Nepali Congress at Dewal Dibyapur of Ajaymeru Rural Municipality Sunday, the party President insisted on the need of victory of NC-headed democratic alliance in the elections (House of Representatives and State Assemblies) to ensure the people’s rights and accelerate the development endeavours.

Accusing the leftist alliance of intending to impose one-party dictatorship in the country, he viewed that people would not be given the right to live at their will in the Communist rule.

The Prime Minister who was at his hometown Dadeldhura in course of the election publicity campaign on the eve of the second phase of election taking place this Thursday said, “People are the rulers in democracy.” On the occasion, he pledged to construct a bridge over the Mahakali River at Parigaun of Parshuram Municipality soon.

Also speaking on the occasion, Minister for Information and Communications, Mohan Bahadur Basnet, said the nation and people suffered much during the decade-long armed conflict, pledging to rebuild the structures damaged during the conflict instantly provided that people here make the democratic alliance candidates victorious in the election.

“Far-flung areas lacking telecommunications services will have the connection to the internet service soon. Every school in Dadeldhura will be equipped with internet service.”

The Prime Minister on Sunday itself visited the Nawadurga Temple, the famous Hindu shrine in the district, and paid homage to the deity. RSS