Relief reaching out to quake survivors 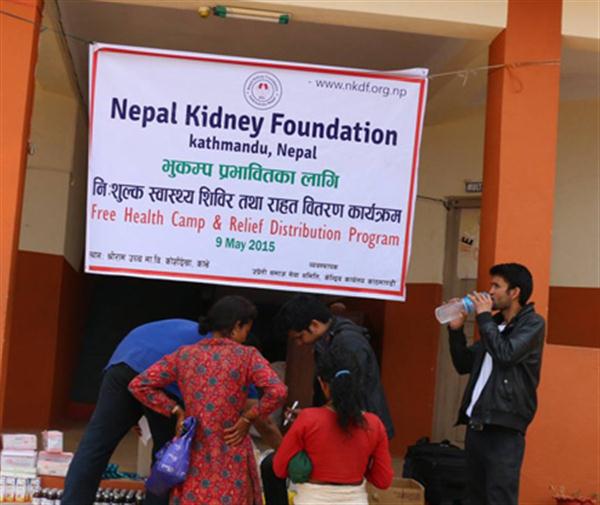 Nepal Kidney Foundation has distributed relief along with a free health camp at quake-affected Koshidekha VDC of Kavre district.

On the occasion, daily essential consumptive goods including 480 tarpaulin sheets and blankets and foodstuffs were distributed to the needy, shared Foundation’s Coordinator Ganesh Uprety.

On the same occasion, a team of doctors from Nepal and Australia undertook health examination and distributed necessary medicines to 300 quake survivors.

There was notable presence of the quake-injured people in the camp. Patients suffering from mental stress were mostly found in course of the health examination, said doctors attending patients in the camp.

Foundation’s founding president Dr Shakti Basnet stressed the need to conduct psycho-social counseling to the quake-hit people simultaneously with the outreach of relief and reconstruction package in the affected area.

In view of the onset of monsoon, the first and foremost demand of disaster-hit people is tent and tarpaulin sheets. Chief Election Commissioner Uprety said that each family should be provided with at least five tarpaulin sheets to save their lives, livestock and food grains.

He added they should be given a feeling of being secured in the second phase by providing them with zinc corrugated sheets.
Meanwhile, Prabhu Group –a group carrying out financial transactions – has handed over tarpaulin sheets worth Rs 1.5 million to nomadic Chepang community in Chitwan.

The Group in coordination with the Chitwan District Administration Office distributed the relief materials to Chepang community people residing in Darechowk-7,8 and 9 in Chitwan after the latter’s complaint of being deprived of tarpaulin sheets, said Group Chairperson Kusum Lama.

The needy Chepang people were provided with total 150 sheets of tarpaulin.

Association’s Nepal Chapter distributed 270 speeping bags, equal number of mats and tents worth Rs 2 million to the survivors.
Nepal Chapter Chairperson Devkaji Shakya stressed the need to extend support to people hit hard by quake when the country is grappling with a national crisis. RSS