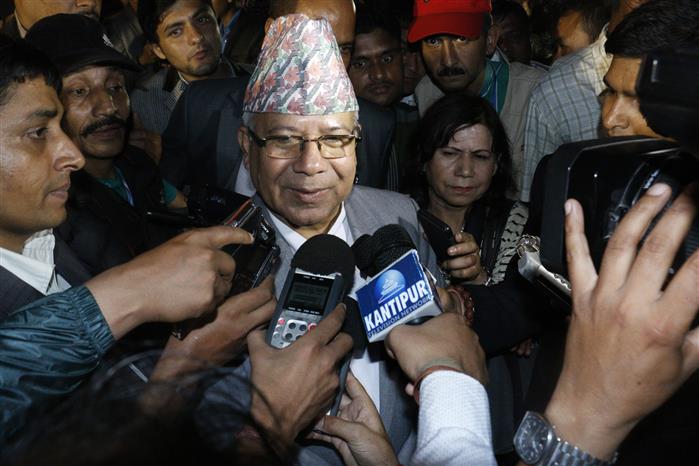 CPN (UML) leader and former Prime Minister Madhav Kumar Nepal on Monday appealed to the disgruntled Madhes-centric parties to immediately return to the negotiating table and participate in a campaign for nation building.

Speaking at an interaction held by UML Central Publicity and Publication Department here, leader Nepal called on the agitating parties to come clear on their demands.

Stating that the country is on the threshold of change of government, Nepal urged the Madhes-centric parties to participate in the nation building and contribute towards maintaining social harmony and unity.

“The country has achieved a democratic and progressive constitution, and it is now time to embark on economic prosperity,” Nepal said adding, “Friends that were left out of the final stages of the constitution making should join the journey of nation building from where they can and whenever they can.” The former premier also said the new constitution did not discriminate the Madhesi people in any sense of the meaning.

He warned of taking action against any UML cadres participating in violent activities in Madhes and stressed that the blockade, which would push the country towards crisis, was not going to be in the interest of anyone. He added that the obstruction of essential supplies on the cusp of festivals had aggravated the problems of the Nepali people.

“I want to appeal to the Indian government and the concerned from the perspective of a sovereign country’s right to transportation to remove the obstruction immediately at transit point and allow free freight service,” Nepal said.

The UML leader also expressed concern over a false rumour in relation to the naturalized citizen being barred from top position in the government which he said was a general demand among the people. The circulating rumour is that Madhesi people would be barred from becoming ministers and lawmakers.

On the occasion, UML General Secretary Ishwor Pokharel said none of the countries should express their dissatisfaction on promulgation of the constitution and added the country should be able to unfurl the flag of independence.

UML Secretary and Publicity Department Head Yogesh Bhattarai said the party had held national activists’ gathering in Kathmandu after the promulgation of the new constitution. RSS