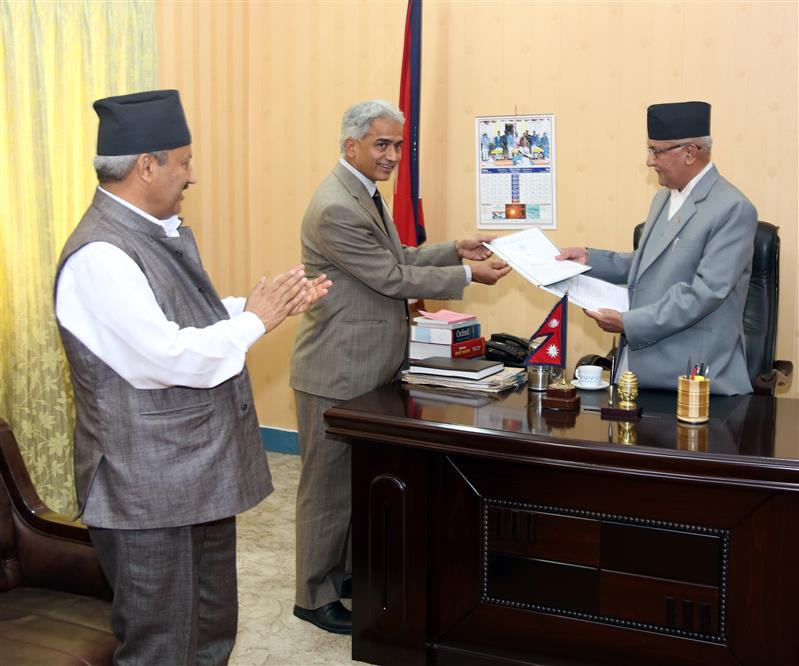 The Medical Education Recommendation Commission today presented the draft of the National Medical Education Act to Prime Minister KP Sharma Oli at his official residence at Baluwatar aiming to streamline the management of the medical education.

The government had formed the Commission under the chairmanship of Education Minister, Giriraj Mani Pokharel on January 24. The draft of the proposed Act was prepared after an assessment of the report prepared by the Mathema Commission to end various agitation, strikes and multiple forms of flaws plaguing the medical sector of Nepal.

Responding to the draft, PM Oli directed Minister Pokharel to table it in the parliament after finalizing it.

The Commission’s Chairman will be the PM and it will take policy level decision on monitoring, accreditation, curriculum, admission system, examinations, scholarships and cost management.

In order to make the admission process transparent in the medical sector, the government, non government and private medical colleges will be asked to seek admission purely on basis of ability, mention explicitly the cost on the admission notice as per the set standards, and prohibit the permission for letter of intent for the next 10 years to run bachelor level programmes in medical, dental and nursing subjects within Kathmandu valley, Commission Executive Vice Chairman, Dr Bhagwan Koirala said.

He said the institutes that have ready infrastructure with the letter of intent in possession will be brought under the government ownership with due compensation and that inhibitions will not be imposed on any institutes to open in future under the new Medical University Act.

As per the provision, for a medical college to open it will be required to have had operated its own hospital for three years in its own land property.

The foreign students looking for study in Nepal and Nepali students heading abroad will have to appear for entrance examinations, as per the draft. The government also plans to upgrade the level of coordination among the health and education ministries in this sector. The Commission’s term will expire only after three more months. RSS