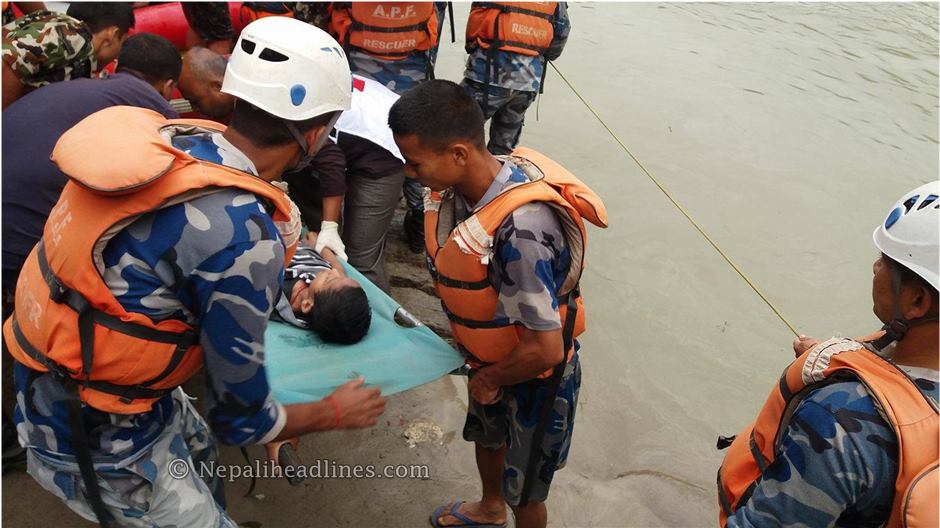 28 Oct, Malekhu: The death toll from the Trishuli River bus plunge in Dhading early this morning has reached 30. Among the dead, identities of 20 have been ascertained.

Likewise six-year-old Aditya Yadav of Bodebarsain Rural Municipality-2, Chandrarekha Pranami of ward no. 3 of the same rural municipality, Ramanand Yadav, Parbati Yadav, 25, and three-year-old Sushan Chaudhary of Nereya, Saptari are among those killed in the accident.

The bus ( Na 6 Kha 1467) en route to Kathmandu from Rajbiraj of Saptari had gone missing in the Trishuli River after falling from the turning point at Ghatbesi in Gajuri Rural Municipality along the Prithvi Highway in Dhading at 5:00 am this morning. Later, 15 were rescued alive and among the injured, Durganand Chaudhary and Abhishek Chaudhary of Rajbiraj-6 were flown to Kathmandu and they are being treated at the Trauma Centre while others are receiving treatment at the Gajuri Hospital.

Over-speed is blamed for the fatal accident of the overcrowded bus. Passengers were finding it difficult to fix themselves in the seat due to over-speed, as reported by injured Manoj Kumar Thakur.

The Nepal Police, Armed Police Force, Nepal Army, locals and the Nepal Red Cross Society have been mobilised for the rescue efforts.